Last week we studied about how angels rejoice over one

accepted Jesus Christ as your Lord and Saviour?  I

remember on a youth mission trip the group was at a

park at Indiana Dunes in northern Indiana, it was about

asked, Has there ever come a time in your life when you

accepted Jesus Christ as your Saviour?  The twilight, the

atmosphere, even a storm brewing, was conducive to

spiritual introspective.   If you have never repented,

when do you plan to do so?

Have the angels ever rejoiced over you?  Will they ever

rejoice at your salvation?

I Peter 1:12 - "them which have preached the gospel unto

you with the Holy Ghost sent down from heaven,

which things the angels desire to look into"

Today we study the miracle of the incarnation - when God,

the Spirit, became man, the flesh.

An angel is involved in the announcement of the plans for

v. 26 - Here - the angel Gabriel is sent to start the process

that God planned from the beginning of the world.

Gabriel sent.  Christ, the Sent of God!  You/me are sent.

Nazareth, a city of Galilee, hidden in the hills.  A rendez-

vous for the worst of people, a proverbial place out of

A deeper interest should gather around Jesus coming into

the world to save mankind from their sins, than that of

the beginning of the material universe.

Genesis gives to us the account of the mysterious origin

of the material world - Luke gives us the account of the

mysterious origin of the new creation and the salvation

Jesus is the one to be magnified - not Mary.

I would like to ask the women folk, if you had lived in that

generation, would you have qualified to be the mother of

the Son of God?

We are living in a very evil age - we count God's

commandment as nothing and commit fornication or adultery

as if eating a piece of bread or taking a sip of water.  Mary is

the original madonna (a title of respect)- today you have a

cult star by the same name of which she is not worthy.  It is

v. 29 - Receive what is written - being assured that the same

power of the Highest by which the crucified Jesus

was raised from the tomb where He had lain for three

days, was able to overshadow the virgin of Nazereth,

which was called the Son of God! 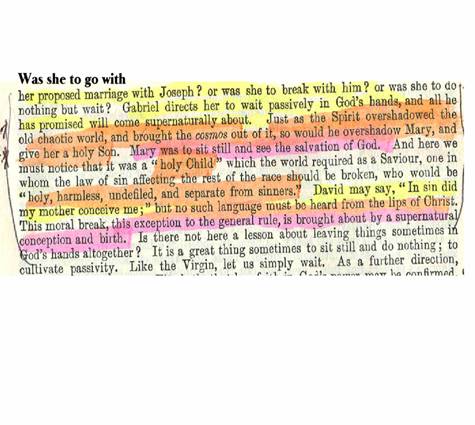 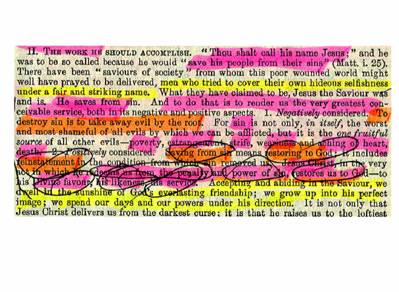 "He shall be called the Son of the Highest" - Wed. night

taking out garbage & looking at the starts.

A new king - an everlasting Monarch!

"the throne of his father David"

Yet unfulfilled - speaks of a restoration of Israel.

It has been 2000 years since Gabriel spoke of a

kingdom that would have no end!

Today the Jews are looking in all the wrong places -

The Jews have been kept distinct even though

intermingled with the nations of the world and today

v. 33 - the dignity and power that Christ shall attain -

v. 35 - In Christ we have the  humanity and the Divinity

in one, each perfect and complete.  What ever can be

said of man, it can be said of Christ (except sin),

"I and my Father are one"

"This is the Lord's doing, it is marvelous in our eyes"

Reminds one of the opening words of Genesis at the

dawn of creation - "The Spirit moved (brooded) over

the face of the deep".

The Word was conceived in the womb of a woman,

not after the manner of men, but by the operation of

the Holy Ghost, whereby a virgin was, beyond the law

of nature, enabled to conceive, and that which was

conceived in her was originally and completely

Holiness is not a mere attainment, obedience to the

moral law - it is a new supernatural being - "born of

the Spirit" - "not born of blood, nor of the will of the

flesh, nor of the will of man, but of God"

Notice the attitude of Mary - "Behold the hand-maiden

of the Lord, be it unto me according to thy word"

She accepts the sacrifice - she submitted herself of her

own free will to what she felt was the will & wish of God!

Her innocence was vindicated - Matt. 1:20

thankfulness, the deep awe and gratitude of their hearts.

Compare songs of  Hannah and Deborah in OT

there are those who would euthanize it,

damage it, desecrate it.

The madness associated with censorship of expressions

of worship on government property  - coming across town

his iniquity be found to be hateful"

Abraham believed God and it was accounted unto

"Blessed is she that believed" - play off of womanhood.

What kind of person would forfeit their virginity?

Who would abort a child to compound that evil?

Notice personal gladness & emotion, losing self in the

sense of unspeakable lovingkindness of God!

our frame, He remembereth that we are dust"

Distant generations will not hear our name, but in the

remotest times we shall be dwelling and serving in

the beginning and the end, the first and the

God receive His mercy in every generation. 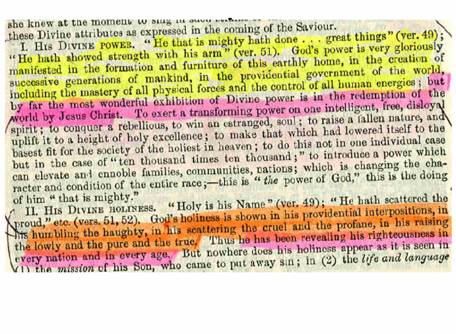 Mary glorifies four attributes of God - His power, His

holiness, His Mercy and His faithfulness.

GOD IS THE SOURCE OF MARY'S JOY!

Surely in all the world's creation, His might had never

been shown as it was now about to be manifest in her!

In the Incarnation, God was sending real help to His

people.  It was the crowning act of mercy, and the

fulfillment of the promises made to Abraham and his

in review His  power, His mercy, and finally His

faithfulness.  All these are illustrated eminently

conception of what is little and great as though

the unborn Babe had already done His mighty

& strange work in the world.

God's holiness is shown in His providential inter-

positions, in His humbling the haughty, in His

scattering the cruel and the profane, in His raising

the lowly and the pure and the true.

Thus, He has been revealing His righteousness in

EVERY NATION & in EVERY AGE

The fidelity of God to His covenant with Israel!

We have no right to hope and no reason to expect,

that He will ever manifest  Himself to us in more

attractive features than as we see Him in the Son

that was born on Christmas Day!