It would be a very interesting to study the errands of angels in Scripture.

“Are they not all ministering spirits, sent forth to minister for them who

would be compounded at the expense of the birth of Jesus Christ, who not only

But I will say that the word “angel” is mentioned 201 times in the Bible,

51 of which is in the book of Revelation.  “Angels” in the plural is mentioned

93 times with 23 of those from Revelation.

destruction of – The Lord Himself, in an exception, went with two of

them to tell Abraham.  Genesis 19

* An angel delivered Shadrach, Meshach and Abednego from the fiery furnace -

* An angel was sent to shut the lions mouths while Daniel was in the lions den.

* An angel was sent to the gentile Corneilous that led to his salvation – Acts 10:22

* An angel gave to John the Revelation of Jesus Christ – Revelation 1:1

* Angels are associated with the seven last plagues that will plague the earth – ch. 15

* An angel, at the end of time, “sware by Him that liveth for ever and ever, who

therein are….there should be time no longer” – Revelation 10:6

* Angels are sent, at the end of time, to “gather out of His kingdom, all that

* Angels are sent, at the end of the world, to “gather together His elect from the

the conception and birth of our Lord and Savior, Jesus Christ!

of Promise had been divided into Judea, , Peraea and

.  Galilee was the the northern department, and comprised

the old territory of the tribes of Zebulon, Naphtali, and Asher.  From

Josepheus, we learn that at this period the northern division was

rich and populous, and covered with flourishing towns.

of the house of David; and the virgin’s name was Mary.”

v. 28 – “Hail, thou that art highly favored” – the literal translation

is “having been much graced”

“Blessed art thou among women” is not in the older authorities –

it was said “blessed art thou among women”.  Nothing is related as to

her birth and parentage, as to her gifts of mind and person; it is not

even directly asserted that she belonged to the royal stock of David,

that is to be implied only from such a verse as the 32nd.  After the Lord,

on the cross, solemnly gave her to the care of the beloved disciple, there

is only one allusion to her, an allusion in Acts 1.  There is no reference

to her in the Epistles of Paul, none in that of James, who was certainly nearly

related to her; none in those of John, with whom she had lived.  Luke,

in speaking of her in connection with the birth, says only, “A virgin

espoused to man whose name was Joseph”.   “Blessed,” cried a woman

one day to Jesus, “is she that bare thee!”  He did not deny it; but that

there be no distraction of soul, He added, “Yea, rather, blessed are they

The scriptures portrayal of her bears the marks of Divine wisdom.  The

reticence of Scripture might suggest that the inspiring Spirit of God,

foreseeing the danger which so soon appeared, of an admiration scarcely

separated from and insensibly sliding into grave error, moved the

evangelist from any magnifying of the Virgin.  But the mistaken honor

and exemplary in her conduct.  She is a type of the believer for all times,

in the quietness and confidence which are the believer’s strength, “Blessed

is she that believeth”.

v. 29 – “she was troubled” – more accurately, she was greatly troubled.

Different to Zacharias, who evidently doubted in the mission of

the angel, and who required some sign before he could believe,

Mary simply wondered at the strangeness of what was about to

behold, thou shalt conceive in thy womb, and bring forth

a son, and shalt call His name Jesus”

the shortened Joshua, “The Salvation of Jehovah”

“that holy thing” – In Christ we have the humanity and the Divinity,

each perfect and complete.  Whatever can be said of man can be

“thou shalt call His name Jesus:  for He shall save His people from

aching of heart and death.  Saving us from sin means restoration to

v. 39 – “And Mary arose in those days, and went unto the hill country

with haste, into a city of .

Interposed will be the account in Matthew of the natural suspicion

of Joseph, her betrothed future husband, his action in the matter,

in which her innocence was vindicated. (See Matthew 1:18-25)

performance of those things which were told her from the

Compare Romans 4:18-21 in reference to the faith of Abraham –

He “staggered not at the promise of God through unbelief, but

was strong in faith giving glory to God; and being fully persuaded

that, what he had promised, He was able to perform.”

vs. 46-56 – The Hymn of Mary, commonly called the Magnificat

Notice the personal gladness & emotion, losing herself in the

sense of unspeakable lovingkindness of God!

our frame, He remembereth that we are dust"

Distant generations will not hear our name, but in the

remotest times we shall be dwelling and serving in

God receive His mercy in every generation.

holiness, His Mercy and His faithfulness.

“God commendeth His love toward us, in that, while we were yet

sinners, Christ died for us” 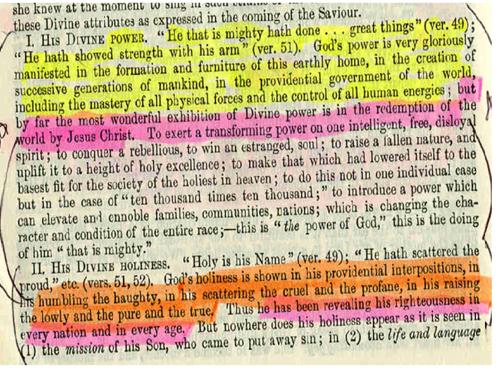 GOD IS THE SOURCE OF MARY'S JOY!

Surely in all the world's creation, His might had never

been shown as it was now about to be manifest in her!

In the Incarnation, God was sending real help to His

people.  It was the crowning act of mercy, and the

fulfillment of the promises made to Abraham and his

in review His  power, His mercy, and finally His

faithfulness.  All these are illustrated eminently

conception of what is little and great as though

the unborn Babe had already done His mighty

& strange work in the world.

God's holiness is shown in His providential inter-

positions, in His humbling the haughty, in His

scattering the cruel and the profane, in His raising

the lowly and the pure and the true.

Thus, He has been revealing His righteousness in

EVERY NATION and in EVERY AGE

The fidelity of God to His covenant with !

We have no right to hope and no reason to expect,

that He will ever manifest  Himself to us in more

attractive features than as we see Him in the Son

that was born on Christmas Day!