In early June of 2009, another abortion doctor was muredered bringing the

The Liberal Media and their spin doctors call acts like this terrorism, all the

States and around 43 million a year around the world.  This seems to be

and II Thessalonians 2:1-12.  Even though God is Omniscient, (He knows all

things), He says that abortion it never entered His mind to require a

person to offer a child for the sin of their own soul.  (Jeremiah 19:5, Micah

Adultery”, now a third “thou shalt not bear false witness (lie)” is added.

These coupled with Moses’ statement to Reuben, Gad and Manasseh,

and the world today.  In preparing for this I found on the internet

that Planned Parenthood does one abortion every 95 seconds, enough to 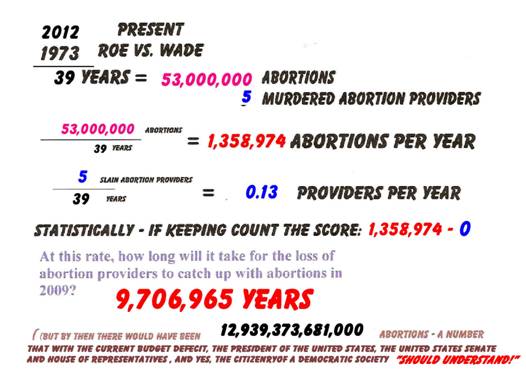