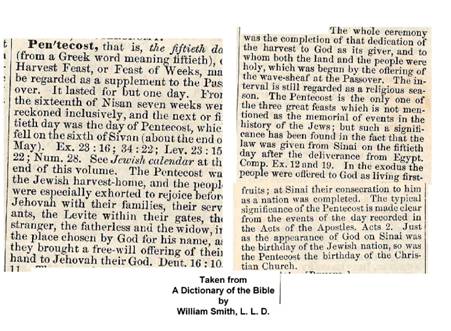 "they were all with one accord in one place"

Holy Ghost, and began to speak with

other tongues, as the Spirit gave them 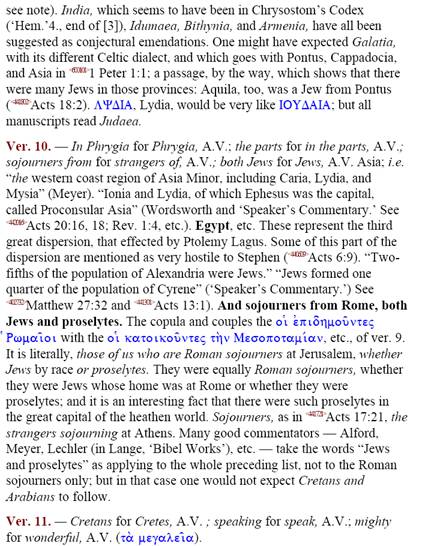 "every man heard them speak in his own language"

v. 13 - There were nay-sayers who thought they were

appreciation of the work of the Holy Spirit, attributed

the tension of feeling which they saw, and the

unintelligible words which they heard, to the effect

So in all times, "they that are born after the flesh

do persecute them that are born after the Spirit" -

as the one they delivered and crucified

according to God's will - Christ died and

God raised Him up - it was not possible that

death could hold Him - this he preaches to

the peoples of the world gathered at

"miracles and wonders and signs" - The miracles of the

gospel are, and were intended to be, a demonstration of

the truth of Christianity, and it is at their peril that

Christians allow themselves to give up this argument

at the bidding of the skeptic.

The greatest miracle was the resurrection from the dead!

v. 23 - "the determinate counsel and foreknowledge of God"

God's counsel that Christ should suffer for sins, was not

a vague, indistinct purpose, leaving much to accident and

the fluctuating will of man; it was determinate and defined

in respect of time and manner and the instruments used

for carrying it out!

"The Lamb slain from the foundation of the world"

and beliefs because of God's promises.

The full liberation of Christ from the dominion of

body from the grave before it saw corruption -

that He would raise up Christ to sit on his

v. 31 - Promising the resurrection of Christ!

v. 33 - The explanation of the wind and cloven tongues

v. 37 - the hearers were under conviction and ask

"Men and brethren, what shall we do?"

"Repent, and be baptized every one of you in the

name of Jesus Christ for the remission of sins, and

ye shall receive the gift of the Holy Ghost"

"Save yourselves from this untoward generation" - v. 40

And especially this wicked generation of today!

v. 42 - "they continued steadfastly in the apostles' doctrine

and fellowship, and in breaking of bread, and in

v. 46 - They continued "daily with one accord in the

temple......with gladness and singleness of heart"

"from house to house" - at home - the private Christian

place of meeting, as contrasted with the temple.

The whole description is a beautiful picture of Christian

v. 47 - "Praising God, and having favor with all the people"

"Those that were being saved" - those who were added to

the church were those who complied with the exhortation,

and escaped from complicity with their unbelieving