The Second return of the Israelites under Ezra -  around sixty

years after the first bunch came back.

the Lord God of Israel had given..”

by an earthly lawgiver, nor just a national treasure accumulated

The man who would reform others must begin by himself being

Lord, and to do it, and to teach in Israel statutes and

Not so much a writer as an expounder.

vs. 11-26 - Artaxerxes helped by facilitating and financing the

v. 23 - “Whatsoever is commanded by the God of heaven, let

it be diligently done for the house of the God of

The number of those who went up to Jerusalem with

Ezra and the names of the chief men.

do we find them in actual fact?  The royal family ought to

have been foremost in such an undertaking but who was

Only one of his family is mentioned as returning -

In the first return, Zerubbabel was foremost and there

Is this the beginning of the descent which ends long after

v. 15 - as we studied earlier there seems to have been a

special disinclination on the part of the Levites

to return to Jerusalem - only seventy-four went up

with Zerubbabel, when the priests who returned

were there none numbered in the first detachment - none

were found after three days search - they were  conspicuous

by their absence” -did the jealous spirit of Korah

Those who should have been in the van are either in the rear,

or else, not present at all?

their office, the priests and Levites were fitting

delivered us from the hand of the enemy”

How God delivered we are not told but evidently

through no “arm of the flesh” - the hand of God led

them safely through all perils of the way and brought

Ezra and his entourage without loss or damage to

v. 34 - the object was to see that what was delivered

to Meremoth corresponded exactly with

what Ezra had given in charge to Sherebiah

and Hashabiah and others at the river Ahava.

It seems that during the time between

Zerubbabel’s rule and the coming of Ezra -

the people did what mankind is good at

throughout history - doing “what seemed

good in their own eyes” and it appears

that a fusion had begun between the Jews

and the neighboring nations. 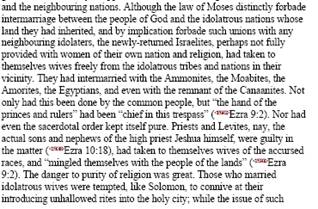 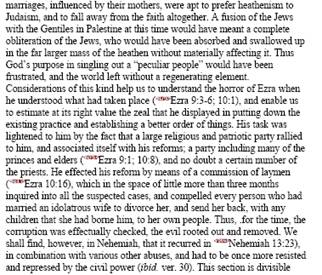 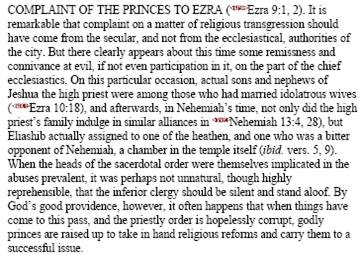 The complaint was not so much that the Jews

had actually adopted idolatrous functions but

that they were not keeping themselves wholly

aloof from them - foreign wives would introduce

idolatrous rites into their very homes.

“so that the holy seed have mingled themselves

with the people of those lands:”

They were “a kingdom of priests, a holy nation”

They were to be “separated from all the people

and to be a “peculiar people”

When they mingled with the people of the land

they not only broke a positive command -

entire purpose for them and to render all that

He had done for them of no effect.

“the hand of the princes and rulers hath been

chief in this trespass” - the upper classes,

both clerical and lay people, had been the

More of horror than grief - a crowd assembled around

him sympathizing with him - they were alarmed

at the transgression of the commands of God -

kindled against you, and destroy thee

what to do or even say.

the Canaanitish nations was the sole

reason why their land was taken from them

and given to the Israelites.

"the sow that was washed"returning to her

This was a national sin!

A very large assembly came together at the end of

that all present should at once enter into a

special covenant with God that they would

do their utmost to have the mixed marriages

dissolved (they were made contrary to the

law and thus invalid), and the idolatrous wives

and children, sent out of the country.

v. 1 - there was very sore weeping - much sorrow

v. 2 - "yet now there is hope in Israel concerning

v. 6 - mourning and now fasting of the strictest

vs. 7-8 -  "proclamation throughout Judah and

Jerusalem unto all" that a limit of three

days to do this was set - absentees were

threatened with heavy penalties of

excommunication and forfeiture of

The urgency - within "three days"

v. 9 - All the men of Judah and Benjamin

assembled - the assembly was accompanied

by a very heavy rain

"to increase the trespass of Israel" - to add to that

which was already too great - the sin had been public -

BE READY TO DO HIS PLEASURE AND NOT YOUR

(the role of pleasure in worldly society) - "lovers of

This must start individually - not nationally - with

A national confession and national forsaking of sin -

This applies not only to nations but to churches, families,

individuals - Where there is association with evil,

"As thou hast said, so we must do" - first carried out

with very great zeal - then carried out with very

This was done in the face of very great difficulty -

the rain being maybe the least difficulty.

This hit men in a very tender place but there was

very little opposition - but in all true repentance there

v. 15 - my commentary says that the true meaning

about this matter....Meshullam and Shabbethai

the Levite helped them"

The opposition did not delay the action more than a

Without partiality  - Whoever offended whether priests,

must be - there was but one measure for all - no

Ezra punishes the wrong-doers by placing their

name on record that others may fear  - (apparently no

privacy acts in those days) - first place in the catalogue

of offenders were the priests, their sin the greatest

since they were the special custodians of the Law.

Of the laymen, only ten of thirty-six families were

Three of the four priestly families were guilty,

even the near-kindred of the high priest!

It was much to have restored to them the

material house of God's presence - It was much

more to have such a reformed "spiritual house"

or congregation, rightly to use that material