Surprise!  I still plan to teach the rest of Hebrews

but I want to deviate today and teach the first part

of the scheduled book of Ezra.

Joe Allen came over with a big ladder and helped me

end of my house where squirrels have gnawed a hole and

have become all too familiar to my attic!

gutters and re-raking much of the yard - Polly had

FAITH team visitation so I came in with her and went

up to the third floor in the to

start my study on Ezra.

something but the study was so interesting and timely

and the combination was a pleasant uncomfortable

name of Dewey Stigall who told my Dad that he

bet that Dad had "climbed to the moon by now" as

many times as he had ascended the silo to feed silage

to the dairy cows.

Although my four or five times up the ladder doesn't

qualify for "the moon" - yet it felt like it.

I really enjoyed that study - at the time it seemed so

to dove-tail with what I recently have tried to get

across in Hebrews about Christ, our Great High

Priest, His work and the dangers of apostasy from

the faith once delivered unto the saints.

To me, this is a very important lesson (as all God's

Word, no doubt is) and very timely.

The background of this is God's attempt to plant

in Canaan, the , a people that would

do His will and that the Messiah could come through

They failed in doing His will - their nation broke up

and went into captivity for seventy years as the Lord

The importance of the lesson for our times is that

church age and that the Messiah  will return someday

to take us to be with Him for ever in the air.

We should beware, as Christians that we fail not as

the Jews did - these things have been written for

our admonition upon whom the ends of the world

During this time, the Persian people recognized a

single Supreme Deity - this throws light on the

whole history of the Jews under the Persians -

the friendly decrees of Darius, Artaxerxes,

and Esther and Mordecai under Ahasuerus - but this

must not be carried too far as the Persians believed

in other gods as well.

v. 1 - the first year of Cyrus - corresponds to

Daniel 5:30 when Belshazzar was overthrown.

Daniel seems to have calculated the time - he had

into which the ruined city had fallen - the

clause is repeated in the next verse.

religious feeling and goodness of heart

* The Greek, AEschylus calls  him kindly or gracious.

wisdom, virtue & greatness of soul he excelled all other

* Diodorus ascribes to him a remarkable power

of self-command, together with good feeling and

* The Bible seems to back them up

"he that is least in the is greater than

he" - speaking of John the Baptist

What shall it be said of you or me?

Our behavior today is not without precedent! 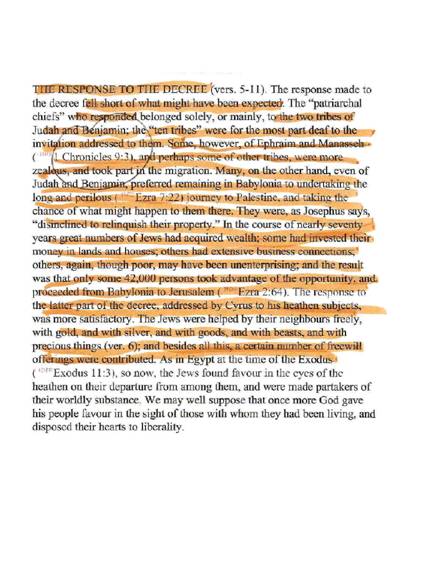 Sacred vessels which were used in the temples service/

put up in or Bel - Belshazzar

desecrated them at his banquet

A careful record should be kept of the families

by which the state of was to be re-established.

Already, a large number of the Jews among the

captives, who could not show their father's house,

The kind of men that came back from the captivity.

They appear to have been men, in the main, loving

the old state of things - conservative, if you will - in

politics keeping in the person of Zerubbabel their chief

ruler, to the ancient dynasty of David.  (It was through the

seed of David that God had promised the Messiah)

In church matters, the returning exiles showed their

strong respect for precedents and the past by submitting

to Jeshua as the chief priest -

Lord stirred up the spirit of Zerubbabel...

and the spirit of Joshua...the high priest"

Another example of their conservatism was the special

importance put on the question of genealogy.  A strong

"the old times before them"

They were returning refugees, not colonists, men

called upon to merely rebuild and restore, and

not to DEVISE and CREATE!

Among the first signals of division, devision if

there is such a word, was Polly telling me of

an lady, who no longer goes to this church, saying

"this music doesn't touch me" - apparently in

the contemporary movement, it is really about

The number of those who returned from the Captivity.

children that had come up out of many

There are thirty-five families or groups mentioned

here and what are they among the thousands of ?

Compare this list with the one in ch. 8 and you will

see names of members of these thirty-five families

who did not come back at the first, but came later.

per cent of the priests returned, only four courses out of

and Solomon, it was the hay-day of .

I wonder if in , our hay-day is passed?

The singers and musicians were drawn from the three

It is remarkable that no descendants of either Heman

or Jeduthun took part in the return. 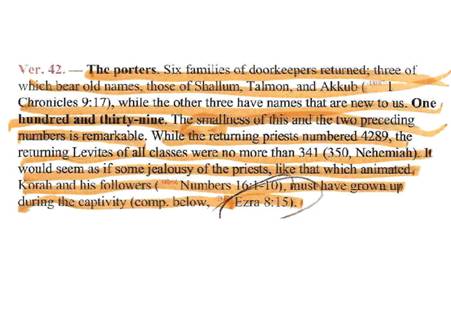 loveth to have the preeminence among them, 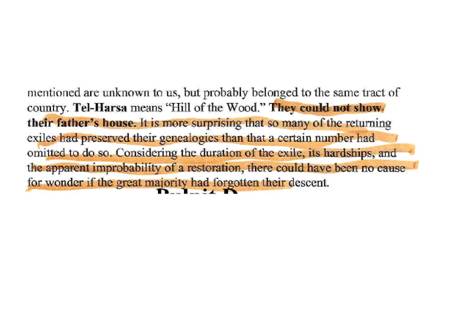 Lose hope, lose faith, the care of this world -

having loved this present world, and

Through sin something is lost that is never 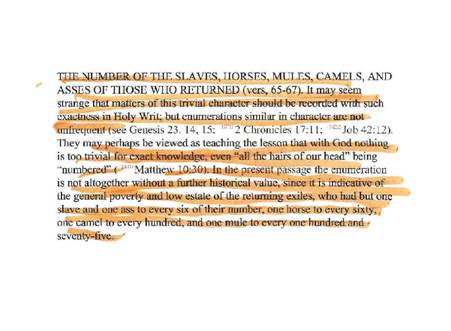 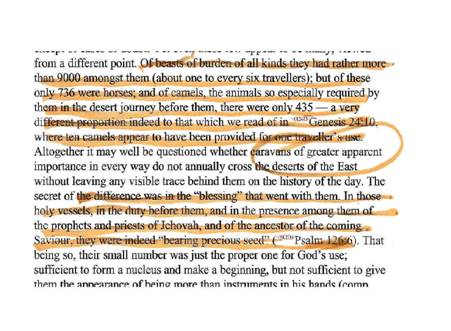 and so the apocryphal Esdras - Perhaps,

in the great default of Levites, the service

of these persons may  have been used to

swell the sacred choruses of the time -

Special Names :  we find this second entrance into

Canaan, this return from the Babylonian

captivity, headed, spiritually, by one

bearing the greatest of Jewish names -

These names - Jeshua, Zerubbabel and ,

Jesus Christ - the High Priest of the Universe -

"To Him give all the prophets witness, that

through His name whosoever believeth in

steps  taken to fulfill the prophecy of Micah 5:2 -

the place where heaven came nearest to earth!

Zerubbabel - the name of a direct ancestor of

The ruins were carefully examined, the site of the

old altar was ascertained, and care was taken to

put the new one in its place.

v. 1 - "the people gathered themselves together as

"as it is written in the Law" - it was an express

command of God to the Israelites that sacrifice

should be offered only at in the place

which He should appoint.

and they offered burnt offerings thereon

They said nothing about the same message with just

a different presentation because they were bound

as Moses was when God said "See....look that thou

make all things according to the pattern shewed

They built the new altar upon the foundations

of the old one, making it exactly conform to them.

This was done, no doubt, to indicate that the

religion which the exiles brought back from

was in every respect identical with that

which they  had possessed prior to be carried

"the daily burnt offerings by number,

we understand that all the particulars were

"morning and evening"  - the very pulse of the

How important under the gospel dispensation for

the perpetual intercession of Christ!

"seeing He ever liveth to make intercession for them"

Herein is our pulse of life -

When We All Get to Heaven!

SPIRITUAL PEDIGREE - I think of all who live in

the world today who are basically dead - dead to life -

The Explorer story of Drusilla Bates who

lost her life on her wedding day in ,

Mrs. Spurgeon - would have been a witness in the

Judgment against her son Charles, had he

not accepted Jesus Christ as his personal

"whoso shall offend one of these little ones which

believe in me, it were better for him that a millstone

were hanged about his neck, and that he were

The odds of being born - sperm count - egg -

then after being born against all odds, then to

miss the purpose of life, to lose one's soul - "oh,

think of the masses of humanity "without God

and without hope in the world"