Abraham's life is given with great detail from his

emigration from Chaldea to his death in   -

God determines to call a man through whom He

will make a nation that would be responsible of

carrying God's revelation to other men and

through which the Redeemer could come to work

out the SALVATION OF ALL MANKIND!

God promises Abram a land, a seed and a blessing!

A great inheritance, a great posterity, a great renown,

a great influence and A GREAT SALVATION!

of thy country, and from thy kindred, and from

thy father's house, unto a land that I will shew thee"

A summons was given to leave all - reminiscent of Jesus'

To be a blessing through the power and favor of God

is the highest honor in the world!  The help we can give

to others morally is far greater than that we can bestow

Men will be either blessed or cursed of God according

to their attitude towards Abram.

"And in thee shall all the families of the earth be

blessed" - the Divine promise of salvation was narrowed

Compare modern resentment of the Arabs of Christ

and their preference for Mohammed with the

resentment of Nimrod and Cush!

v. 4 - "So Abram departed, as the Lord had spoken unto

knowing whither he went"

A day by day journey under Divine direction!

the Canaanite was then in the land"

A reminder to Abram of his heavenly country,

seeing he was a stranger in this earthly one.

Wanderings - Abram must have eagerly expected

rest in the but instead, he finds

that he must journey still.

"unto thy seed" - to himself God gave

"none inheritance in it, no, not so much as to set

"will I give this land"  - a great promise, that the

Canaanites should be DISPOSSESSED, and their

country given to the offspring of a childless old man

Notice the discouragements - he was childless -

the land was occupied already - the prevalence

Beware of the attitude that because a saint

cannot discern how a promise is to be fulfilled that

one does not challenge the Divine resources and

end up trying to impeach the Divine faithfulness!

The promise may seem long delayed but the believer

and remember that His timing is ALWAYS best!

Beware of the temptation to think that the glories

of the future may not be worth the sacrifices made

today to secure them!

present time are not worthy to be compared

with the glory which shall be revealed in us"

"and there builded he an altar unto the Lord"

Note the joy of the Divine presence and the consolation

It is often said of Abraham and the patriarchs

that they built altars to the Lord - it is never

said that they built houses to themselves!

In this modern age, in how many homes is that

altar in  need of repair or worse still, has it not

even been set up?

The Bible has many encouragements to pray, but

not one warning against asking too much!

v. 10 - the occurrence of a famine just at the time

of Abram's entering the land - a test of faith?

"the famine was grievous"

Abram was not equal to this test and soon yielded to

temptation to take matters in his own hands.

"Abram went down into to sojourn there"

It often seems at first that a compromise between

the methods of the world and God's will and promises

works out very well - that pragmatism is quite

profitable - Christians may even misinterpret

prosperity as a confirmation that one is in the right

way and become satisfied with the situation but it is

one in which God must use chastisement to get them

out of this compromise position and back into the

The descent into was a special hazard - it

endangered the life of Abram, the chastity of Sarai,

and a peril to the fulfillment of God's promise.

Thus the dangers of resorting to a worldly policy?

Surely Abram was ashamed when he reflected on

the danger he  had put Sarai into in the house of

Pharaoh and his own cowardly spirit which had bartered

looked like selling his wife's purity for flocks and herds -

no doubt conscience exacted a vengeance on the guilty

soul of the patriarch as it does on that of every sinner.

God went down and rescued Abram.

vs. 18-19 - The heathen Pharaoh's righteous rebuke

Learn:  that the best of men may fall into the greatest

of sins.  That a sojourn in the midst of a worldly

The beginning of that sojourn was wrong - its end

disgraceful - God was dishonored by this act of

Abram should not have gone into in the first

place - God would have taken care of him, even during

If we under our own special set of circumstances,

resort to our own way, and try to rationalize as Abram

did, we too will be rebuked by the very unbelievers which

we are trying to win.

We too, will learn like Abram, that our compromise

has destroyed our testimony and that heathen, rather

than being drawn to God end up rebuking us for our

v. 1 - a mercy of God that either one of them returned

considering the sin they committed and the

v. 4 - the influence of communion with God on the

It was there that he had last been in fellowship with

God and to this place he returned to seek forgiveness

and full restoration to God's favor.  God has promised

to forgive us our sins and to cleanse us from all

unrighteousness - I John 1:9 - Abram was restored

to full fellowship and joy of the Lord.

v. 7 - This prosperity was injurious to - it is a poor

bargain when one grows rich at the expense of

There was a strife between brethren and part of the

sad situation was a compromise of their witness before

*  looked towards the plain of Jordan

*  chose all the plain of Jordan

*  Lot pitched his tent towards

*  lingered when warned to flee - had to be drug

Apparently the sojourn in had a more depraving

effect on than it did on Abram.

BEFORE the Lord exceedingly"

Their vileness was restrained neither in quantity nor

Abram understood that Canaan with the blessing of God

was to be preferred to the plain of Jordan (which was

well-watered and as the Garden of Eden) and inhabited

by profane and wicked sinners who had prostituted the

blessings of God to their own carnality.

1.  Beware that people in this day can still do the equivalent

of "pitching their tents towards ".

2.  Mingling with and marrying into the families of the

ungodly ruined the world before the Flood and ruined

people after the Flood.  There must be separation of God's

people from the world.

3.  It is a great mistake to seek first the world, thinking

not to neglect God, but putting Him in the corners of

one's life expecting to finally serve Him in the end?

4.  It is dangerous to go towards if one wants to

5.  Dwight Moody said "it is much easier to lead your

children into than to bring them back"

help in the loss of his kinsman and the misunder--

standing associated with it.

*  "arise, walk through the land in the length of it and

in the breadth of it, for I will give it too thee"

Abram had learned a hard lesson but God in His mercy

Abram has his tent, his altar, the promises, and his God.

He will live in peace!  No man ever comes off a loser who

The last we heard of he was driving his herds and

flocks from   - this represents a considerable

declension in spiritual life to find Lot a citizen of . 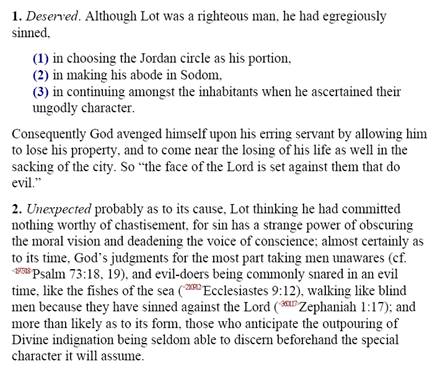 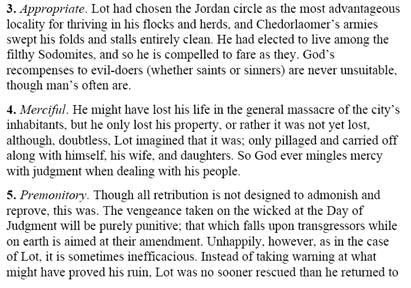 The following taken from The Genesis Record  by Henry Morris 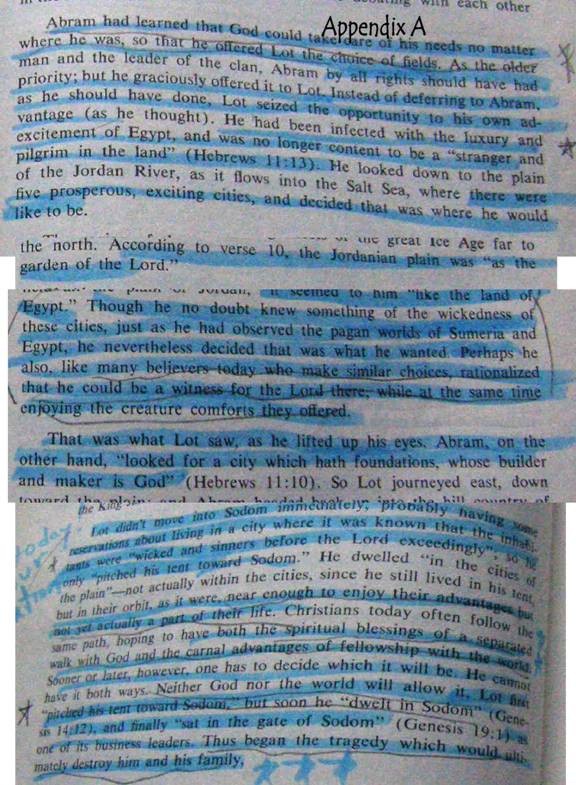