A lot of problems here - v. 1 - Satan deals first with

Eve desired to be independent and had withdrawn

herself out of Adam's sight - sets up a beginning of

the fall before the fall - would it have been any different

if Adam was there?

thing as that?  Note  the  slightly superior condescension

to Eve's "naive" acceptance of God's command - a

technique followed by Satan and his human emissaries

with great success ever since.  Sin always begins by

questioning the Word of God or His goodness or both.

This is the age-old lie of Satan, the one with which he

Satan suggests a distrust of the Divine goodness and

a disbelief in God's truthfulness.  He also intensifies

He attempts to change a Living, Personal God into

a merely general God by using Elohim, not Jehovah,

representing man as a subject and not a son.     The Names of God

Eve was placed at the furthest distance from the

Supreme Being and then assailed.

vs. 2-3 - the woman was wrong to have a conference

with the serpent in matters of so great an

importance, in so familiar a manner.

alter God's Word whether by addition or deletion -

Eve puts in a little addition to God's Word - "neither

shall ye touch it" - is this a misunderstanding

or a rising feeling of dissatisfaction of the

prohibition and an indication that her love

and confidence towards God was beginning

to waver?  Is there doubt &  hesitancy in her

for himself the standards of truth and righteousness.

Christ presents Satan as the liar that he is - John 8:44

Two passages - "resist the devil and he will flee from  you"

and "Save yourselves from this untoward generation".

v. 5 - "your eyes shall be opened" - denoting an impartation

"and ye shall be as gods" - a promise of divinity.

No descendant of Adam has ever lived to an age of

conscious awareness of right and wrong without actually

Doubt and pride - the characteristics of practically every

v. 6 - the attractiveness of sin for the time being, disguising

its true character - the harbinger of death.

"she took of the fruit thereof, and did eat.  And gave also

to her husband" - Eve was to have been an help meet, not

he wanted to remove the fear of punishment from their path,

appearing to be seeking man's good.

soul and spirit which was presented to her.

Eve and Adam bit, they were disobedient in their

unbelief, the were selfish to make self the center of

all things and they showed their love of the world

in their attempt to gratify their senses.

instinct of sinful man to flee from God.

It is noteworthy that people are clothed in heaven -

Rev. 19:14 and Christ is presented as "clothed with

and ever since, sinners have been blaming everyone

and everything but themselves.

Adam showed no grief for his act but rather a

my fault" - sound familiar? Nothing can justify sin.

degradation - on its belly  - judgment without

mercy - hostility between the two - the promise

that the Seed of the woman will destroy the serpent

and the works of the devil.

The promised Seed would one day be born of a human

woman, but Satan was left in the dark as to which woman

and at what time!

We believe in equality and that the woman "as being heirs

"the weaker vessel" - and caution all about the modern anti-Biblical

cultural and personal relationships - citing I Cor. 11:10 - the

example of the fall of angels as an example.

history, that the joy of motherhood has for most normal women

been their greatest  happiness!  Abortion on demand has in the

end some very bitter consequences as time and judgment will

face you shall eat the herb of the field,  not the fruit

of - "till you return to the ground for out

of it you came" - man's mortality is certain - the

consequence of his transgression was the forfeiture

of immunity from death  - "in the day you eat

thereof you shall surely die"  - "be sure you sin

need to run to Him, not from Him!  It is the shortest path

to mercy and forgiveness. 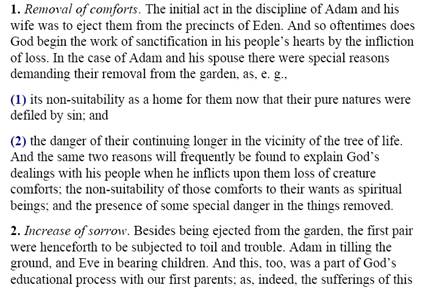 v. 21 - The providence of God - the providing a sinner with such

a covering as God requires must ever be the work of God! 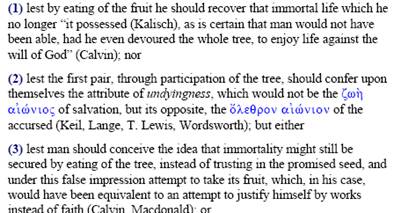 to - meantime - man is utterly  unfit to

dwell within its abode.

Hope - the Divine presence was still with him - Paradise

was still reserved for him - there was prospect of

readmission to the tree of life and when purified by

life's discipline he would no longer be excluded. 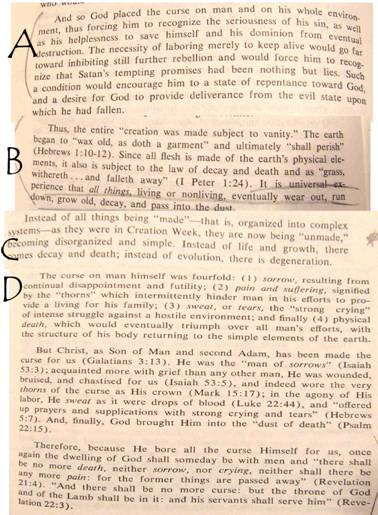 Taken from The Genesis Record by Henry Morris