attribute it to heredity or environment.

"Cain brought of the fruit of the ground an offering" -

exhibiting a spirit of careless unconcern for the will of God

A bloodless sacrifice - of the fruit (not fruits) of the ground -

offering with a stingy hand as many of God's worshippers still

do?  God deserves the first-fruits of our years, powers and labor.

v. 4 - Abel too brings an offering Abel's worship was offered in

the way prescribed - God does not leave men to invent

Cain was a formalist - Abel, a worshipper of God in spirit &

truth.  Neither Cain nor Abel was in no doubt of his position -

the mind of God had been explicitly revealed!

Cain had pious parents, a good home, an  honorable calling,

a religious profession, and yet was lost.  Abel had a short life

and a sad death but he was safe!  Faith in Christ, the promised

Seed made the difference!

v. 5 - Divine displeasure with Cain and his offering

the world through eating of forbidden fruit had quickly

resulted in much more bitter fruit - namely murder - the

Serpent was quickly striking at the seed of the woman,

corrupting her first son and slaying her second, thus

trying to prevent the promise in ch. 3:15

There is no great sin committed but it has been seen

at the door first.  Doing not well precedes the direct

presumptuous sin.  Cain was warned by God Himself

before his fallen countenance darkened his heart with

crime and his brother's blood - what a picture of the

gradual degradation of the conscience - disobedience

of God's command in some minor point - a sense of

against God and man - violent self assertion.

profane thinking  he could hide his sin from God -

unjust in denying himself to be his brother's keeper -

obstinate and desperate in not confessing his sin.

blood crieth unto me" -

their tillage of the ground was not to prosper which

perhaps drove the Cainites to city-building and

desperation - Cain deplores not the enormity of his sin

but the severity of his punishment, under which he

reels and staggers as one amazed.

presence of the Lord"

remember studying this when I first came to

in reference to Christ's words about the end of time being

v. 19 - Lamech was the first polygamist of whom mention is

made, the first by whom "the ethical aspect of marriage,

as ordained by God, was turned into the lust of the eye

and lust of the flesh.

The names of his wives suggest sensual attractions - Adah -

the Adorned - Zillah - shadow - but a second wife is hardly

a wife; she is only the shadow of a wife.

The idea of shutting God out is behind the devising

of the harp and organ.  Metal tools and implements of all

kinds were available to produce creature comforts as well

as musical instruments to stimulate the emotional and

aesthetic senses - although these can be used for good purposes -

God - witness MTV and other examples - the latter seems to

have been their effect and perhaps their purpose, among the

"Naamah" the lovely - the sister of Tubal-cain.

Note the growing sexual laxity among the Cainites by general

vs. 23-24 - Lamech's song and poetry is characteristic of

much human poetry and writing in his assertion of

man's self -sufficiency and independence of God?

Jude 11 warns of the way of Cain.  With the creature comforts and advantages

accruing from the rapidly developing science and technology of the day, it was not

and each clan did whatever they wanted to do, to the extent that their strength and

skills permitted.  There was nothing to restrain them except the superior strength

the appropriate acts and exercises of the stated worship of God! 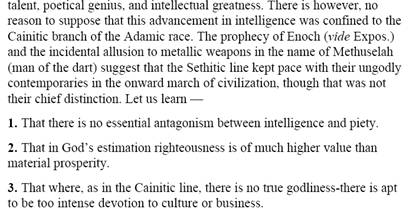 THIS IS OPPOSITE OF SECULAR SEPARATION OF CHURCH & STATE 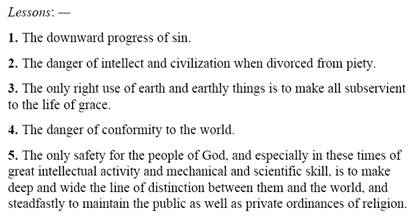