manifestation - He who hitherto has been concealed

will be manifested as the Supreme Ruler & Judge

v. 9 - Everlasting damnation - “from the presence of the Lord”

Expelled from the joy & glory - “from the glory of His power”

As the presence of the glorified Jesus will constitute the happiness

of heaven, so banishment from His presence will constitute the

misery of hell, because the soul is then cut off from the source of

all good and of all holiness.

The Rise of Apostasy and Revelation of the Man of Sin

a great apostasy - until then there is a restraining influence -

When the restraining influence shall be removed, the man

of sin will be revealed accompanied with powers, signs &

wonders of falsehood that will succeed in deceiving those

who refuse the love of the truth.

coming and prepares the way for his advent, not the result

but the cause of his appearance.

How did this happen?   How do things get this bad?

Secular can explain except they are undercover

and deny their takeover.       Secular humanists have been

addressed in the last few Presidential Debates with those

Spiritual apostasy leads a man to moral corruption - the

man of sin could not arise before the Church had fallen

When I was a teenager it would have been impossible in

for anti-christ to appear but not so now.

Humanity was created in the image of God and intended to

be the but humanity may be degraded into

the image of Satan & become a haunt of iniquity.

Apostate - a name which belongs to everyone who in the

struggle of life parts from his Christian convictions,

forsakes the Fountain of Living Water and hews out

v. 4 - As Satan entered into the heart of Judas Iscariot,

the son of perdition, so does he take possession

of the man of sin.

Personification of iniquity - deifier of self.

The obliteration of all Christian interests and the triump

of atheistic malignity - always forcing beliefs on everyone,

doing what they accuse Christians of doing today.

Positivism in our own day has forsaken the worship of a

personal God and betaken itself to worship of humanity,

making it the instrument of the world’s final ruin.

President Bush, this week, talked about fighting those

who are attempting to abolish civilization? 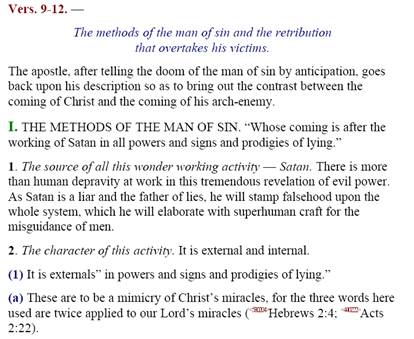 Continued on the next page. 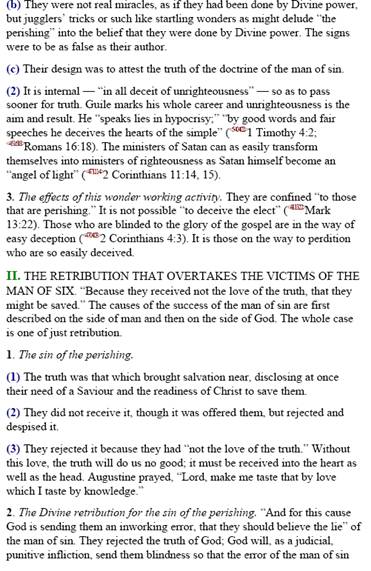 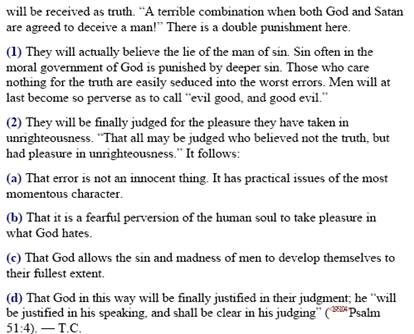 Apocalypse - Satan - his own revelation - a great & noble

apostasy forces of unbelief and evil gathering for a mighty

of revelation, manifesting itself in the life and works of men

of learning and culture, widespread revolt against all forms

of authority, both Divine and human.

A general development of unbelief and lawlessness -

instigated by this man of mighty intellect, great strength of

will, a human Satan, the man of sin, the anti-christ.

Just as there was a fulness of time when Christ should

man of sin - a whole series of events that brings him about.

When the restraining influence (Holy Spirit) is removed,

the mystery of lawlessness will no longer work secretly,

but will be openly manifested.  No longer the mystery,

but the revelation of lawlessness.

Christ said “Because iniquity shall abound, the love of

many shall wax cold”

v. 8 - “whom the Lord shall consume by the word of His

mouth” - the doom of the anti-christ is here announced.

The breath of the Lord is sufficient to overthrown the kingdom

Used in same sentence - The mere appearance of Christ

will annihilate the wicked! 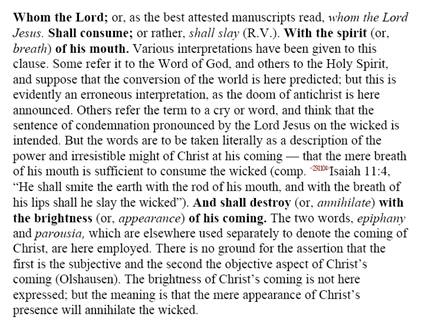 Miracles of man of sin are miracles of falsehood.

insomuch that, if it were possible, they shall

These are by no means irresistible - only they who perish

They would not receive the truth and as they were prevented

from embracing the gospel - they are led astray by many

“that they might be saved” - the result which would naturally

arise from the reception of the truth.

Indifference to the truth is a sign of moral evil! 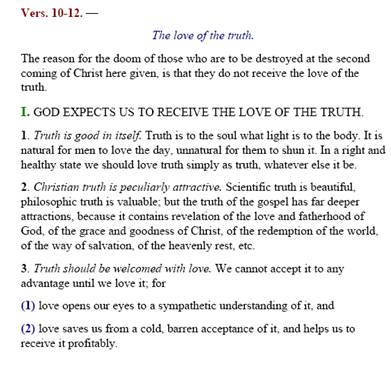 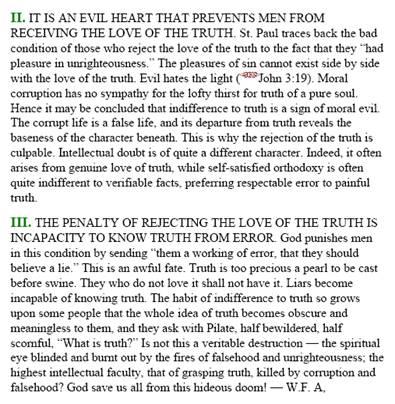 Lost in a perfect maze of falsehood. 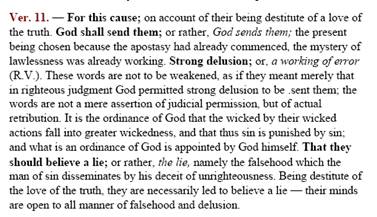 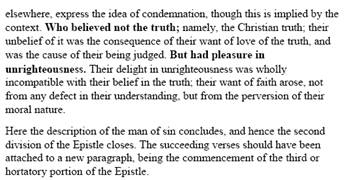 “damned” - “who believe not the truth”

“but have pleasure in unrighteousness”

Those blinded to the glory of the gospel are easily

Our consolation when dark problems of life distress

our soul - “the Lord cometh” 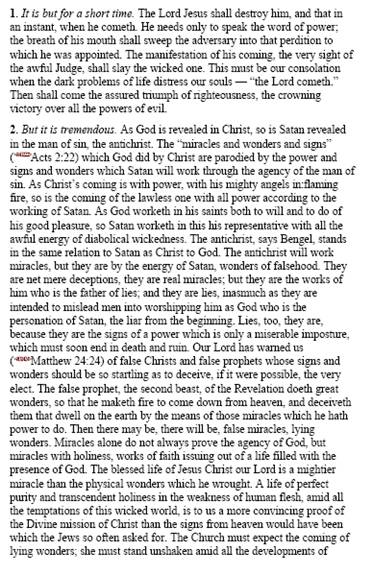 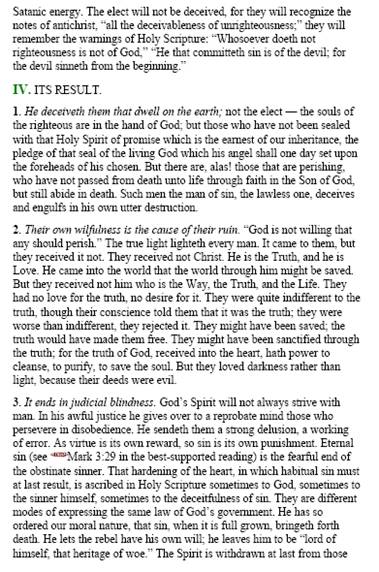 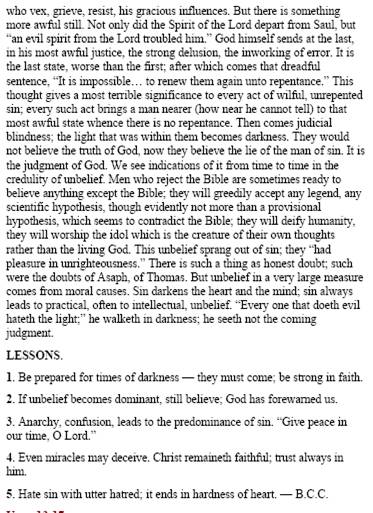