Commentary on Genesis and Henry Morris' The Genesis Record

We are studying the origin and creation of all

things as God has revealed it - and this includes

mankind - the way one reacts to the first verse in the

Bible - "In the beginning God created the heavens

and the earth" determines how the rest is received!

confront an attitude that "science and religion" are

of science falsely so called" - the word is really the

Greek word for knowledge as science, in the modern

sense of the word, the investigation, discovery and

is unknown in Scripture - this proves the antiquity of

scripture because the teaching of evolution and other

modern criticisms are "johnny come latelys" and are

not addressed - it takes for granted that God is the

origin of all things - "All things were made by Him

and without Him was not anything made that was

that this meant to find out the earth's secrets.

Excerpt from my book My One Hundred Favorite

one of the original responsibilities which God gave to man

people, that is the easy part – Clovis men and women lived

firm belief that man will never discover anything that is not

real or true – he may manufacture something that is false but

he can only discover truth -  modern man thinks he is something

but Clovis people could have had electricity or chased mammoths

in helicopters if they knew how to control principles that were

technology that makes one group more successful than another

group – Clovis people were highly intelligent and very skilled to

live in their harsh environment but video games and pornographic

and pseudo-science where the subjugation gets “sticky” – man

selective and biased in the conclusion he comes to – it reminds

me of the proverbial “blind man, in a dark room, looking for a

black cat that isn’t there’

The word used of false science in I Tim. 6:20 is the word taught

in English classes across America as "pseudonym" - bearing a

false name.  This false name is not SCIENCE - I submit to you

Such is "godless humanism" - a heavy hitter in the

educational community of the last 50 years - and one of

the main reasons creationism is under such attack in

American schools  - Kansas is under ridicule by the

leftist media because of passing a law that it must be

taught along side of evolution - Webster's

Dictionary gives this definition of secular humanism:  a doctrine, attitude, or way of life centered on human interests or values; a

philosophy that asserts the dignity and worth of man

and his capacity for self-realization through reason

and that often rejects supernaturalism.

Nothing is more galling to pseudo-science than obvious

ignorance putting on the airs of infallibility....the very

elements which they do not understand - II Peter 2:12 -

"speak evil of things that they understand not"

The Bible speaks of such a condition as "willingly

True science, which has rewarded centuries of labor

have not in a single instance clashed with any truth

This wilful ignorance is a part of "THE LIE"

So as we study the Creation as revealed by God

we may fix our thoughts on a Loving and Omnipotent

God who made a glorious world!

The lesson for all is for men or nations that

THERE IS NO LIFE APART FROM GOD!

Genesis one is neither history, science nor

mythology - it is a REVEALTION.

when - the expression intimates that the 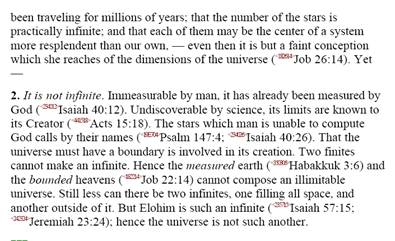 The universe is vast but not infinite - only God is infinite!

It stands out distinctly from His personality!

The Holy Spirit is represented as the formative cause of

all life and order in the world - presented as "brooding"

The formative powers of life and order which were to

burst forth in answer to the six words of the first six days.

Every time the word goes forth from Elohim - it is

followed by instantaneous movement in the chaos.

free - it costs nothing - directly or indirectly - all the earth's

glory is dependent on light - without light there would be

no Super Bowl, no new construction of houses to be worried

about, no ordering from a fast food restaurant, no drive

to work, no nothing!

Not only did God, who is Light, create light but He created

the eye to behold and the brain to translate the light -

God's will is that we know Him, the Light of the world!

v. 7 - the atmospheric firmament - it is the handiwork of

It is not God's handiwork which we are to worship

but He, its Maker.

or creatures for the Creator - it is only modern philosophy

that degrades the Creator from His throne and puts the

creature in His seat.

if it were not for the mercies and faithfulness of God

she wouldn't have to worry about lung cancer because

for not God's design she would realize the above fate.

Javard Lindley's breakup of the pass in Tennessee game

Neither the person who committed adultery last week,

he or she who abused their body with cocaine, those

planning to rob a bank or ring a Salvation Army bell

during Christmas like Lyle Dunbar and Mack Brake could exist -

While in line at a drive up window Friday night, I saw

gravity and centrifugal force they would whiz right

on out into space - sinner and saint alike would be in

the same predicament were it not for God's grace -  we

would end up like the wicked mentioned in Jude 13 -

"wandering stars, to whom the blackness of darkness

The gentle breeze - the south wind blowing - from a

to JW McGaughey's diary of hearing the guns from

Ft. Donaldson during the Civil War!

Is not  God great?

These natures and structures are assigned by God!

He delights in variety  - to wish to be different than

what God created us is a sinful discontent - our

highest function is to act in accordance with our

God designed nature - "Bloom where you are planted"

The seas were divided into oceans, lakes, rivers - the land into

mountains, hills and valleys, the plants into grasses, herbs and

The best way to serve God is to be ourselves, we are all to be

subservient unto one another -

"He made the stars also"   - "He telleth the number of the stars,

vs. 17-18  - An intimation that on this day the astronomical

arrangements for the illumination of the globe and the

measurement of time were permanently settled.

Day-Night- time for work- time for sleep - eventually one day 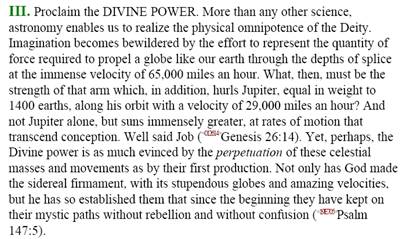 Therefore "Give unto the Lord the glory due unto His name" -

of His happiness in surrounding Himself with living

The aquatic and aerial creatures were in preparation for

the coming of man and to be subservient to his needs and uses.

They were endowed with the power of hereditary transmission.

"Be fruitful and multiply"- (in masses)

v. 26 - A Divine Consultation - His last and greatest work!

"Let us make man in our image" - man's relation to

Contrast - Hilary and Ambrose think that by the plural

"hands" is intimated that there is a more exact and perfect

workmanship in man, and as if it were the greater labor and

skill he had been formed by God, because after "the image and

likeness of God: and that it is not written that any other thing

but man was made by God with both hands, for He saith in

Thus the sad statement of Isaiah 5:4 - "What could have

been done more to my vineyard, that I have not done in

it?  wherefore, when I looked that it should bring forth

grapes, brought it forth wild grapes?

"Be fruitful and multiply and replenish the earth

and subdue it" - utilize the vast resources of the earth,

by agricultural and mining operations, by geographical

Every square inch of earth is capable of subjugation and

occupation - the resources - everything in heaven, earth,

and the sea was placed at his command - nothing was

useless and many things were precious beyond compare.

sword but donated by their Maker.

an expression of admiration  - I got a tinge of

that Friday when I vacuumed up my leaves and the yard    looked so good - contrast last week when I turn around             and there they are again.

v. 1 - " were finished" the ideas of cessation and perfection -

not that God  had simply paused in His activity but the

Divine idea of His universe had been realized.

"and all the host of them" - brand new - a brilliant array

The sabbath is adapted to the wants of man physically,

intellectually, socially, politically - the benefits of a rest

from a week of toil is realized by the manual laborer,

the professional thinker, the social fabric and the body

This is an ordinance of God for the good of man.  Till it

merges with the grand design of an eternal rest, it must

Christ said "the sabbath was made for man, not man the

of God, the absolute self-existent One!

These also were the creation of Jehovah.

v. 7 - Read - the material body and the immaterial soul - so

articulated, so firmly knit - all from a heap of dust!

"I will praise Thee, O Lord; for I am fearfully and

The body is very valuable and we are obligated to neither

dishonor nor abuse it - man's body is the temple of the

unto the Lord the glory due unto His name" - people

talk of Mother Nature??? - let us rejoice in the earth's

beauty and thank God for it!

It was distinguished by the presence of two trees - the Tree

of Life and the Tree of the Knowledge of Good and Evil.

v. 15 - God always locates men in spheres that are exactly

suited to their natures and needs.

Man's endowments and capacities are fitted for activity.

His happiness and safety (against temptation) required

him to be employed.  If God was ever working, why should

man be idle?  "An idle mind is the devil's workshop"

conscience - the ability to distinguish between right

and wrong, duty and sin, sins of commission and sins

of omission - morality had been implanted in their

natures and was intended to regulate their lives -

good would be reaped from obedience and evil would

created with the faculty of speech (a most

of articulate and rational utterance - the capacity

to attach words to ideas.