This chapter contains the earliest form of tabulating

the geographical distribution of the human race.  It

declares that all the successive families of mankind

have sprung from a common stock – all trace their

origin to Noah and his sons – God hath made of one

blood all nations of men for to dwell upon all the

face of the earth.

It is useful to the geographer, the historian, the

politician, but especially the theologian because it

enables him to trace the descent of the woman’s seed

and to mark the fulfillment of Scripture prophecies

concerning the nations of the earth.

It implies that nations have a God assigned title to

the countries which they occupy (implications for

the today) – evidence that the Divinely-

ordered distribution of the earth’s population is

capable of being disturbed by sinful interference

of man – for starters we find the intrusion of the

Cushite into and the Canaanite into what

The Bible depicts the brotherhood of man, the universal

corruption of the race and the necessity of Christ’s

This passage and the next chapter, tell of their moving

outward to accomplish their respective destinies and

common work -  they were meant to overspread the

by conquest – he was a gigantic oppressor of

the people’s liberties and an impious rebel

him with instigating the .

a rude and uncultivated way.

and that the greatest prosperity cannot turn

aside the punishment of sin.

traced to ancestors of the Indo-European peoples.

It is especially that to the descendants of Japheth that

the term “Gentiles” is applied.

I recommend The Genesis Record  by Henry Morris

is associated with – Sabeans are known

both in Arabia and .

was Ham’s oldest – apparently there was resentment

“let us rebel” – the inference is that trained Nimrod

from childhood to be a leader in a planned and organized

rebellion against God’s purposes for mankind – had they

been destined to servitude? – no – they would rule instead

in their struggle for the ascendancy among men.

Nimrod became a “mighty tyrant in the face of Jehovah”

He was powerful in hunting and in wickedness

before the Lord, for he was a hunter of the sons of

men, and he said unto them, “Depart from the

judgment of the Lord, and adhere to the judgment

of Nimrod!”  Therefore it is said:  “As Nimrod the

strong one, strong in hunting, and in wickedness 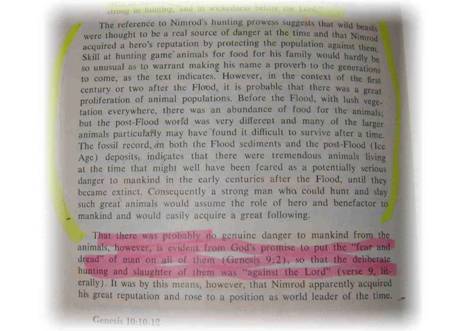 the whole complex was a large metropolitan area

throughout the Tigris and river system.

come out of this branch – Mediterranean locality

eleven sons and an unknown number of daughters –

his eldest was , the progenitor of the Phoenicians –

archaeologists have noted similarities between the

Hittites and the Mongoloids.

progenitors of the Canaanite tribes that inhabited the land

when the Israelites arrived.

The Genesis Record by Henry Morris 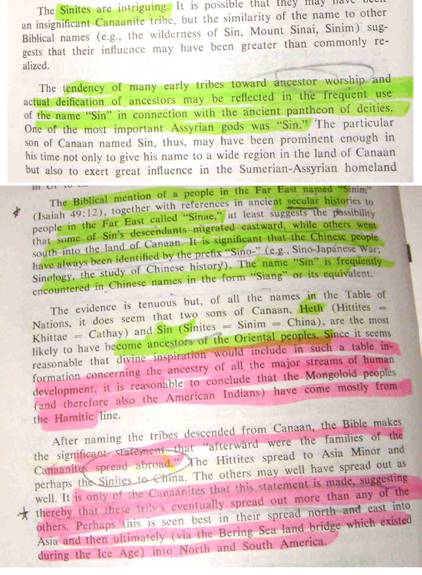 to transmit the knowledge of the true God and His

From comes the Aramaic language – the common

language among the Jews at the time of Christ!

From Eber comes the term Hebrews.

In the days of Peleg was the “earth divided” – continental

drift???  - The possibility of the effects of “the fountains of

the deep being broken up at the time of the Flood caused this.

From this list of distinct family units, distinct languages

subsequent of – there came 26 nations listed from

This country was void of stones and full of clay -

their crime was aggravated because they had

to work to make brick.

"burn them thoroughly" - the were aware that

the second destruction of the world was to be by

fire - archaeologists testify that they were united

by bitumen and that it was almost impossible to

detach one brick from another.

We are aware that God will use fire next time and

has promised never to flood the earth again on

fire, the brick will withstand it?

Nimrod's aim was to create a self-sufficient society

that under his leadership was no longer dependent

Perhaps there was a small number of people who

did not agree with his plans but they would be easily

deposed by such a great hunter of men as described

spirituality - (not changing the message - just the way it is presented? )  - the

stories of creation and redemption.  - This would surely please God and

more than compensate for the fact that the whole project was

contrary to the commands of God and would glorify man's

achievement rather than recognize human frailty and Divine

The absence of true communion with God left

a vacuum in their souls that would soon be filled.

From this came a complex form of evolutionary

pantheism centered in astrology, the occult,

Nimrod had united men in his Satanic partnership,

perhaps many unwittingly.  (Look before you leap)

at the promised exaltation of Shem or simply

a display of that lust of glory which resides in

"let us make us a name"  - called to glorify God's

name, their goal was to make a name for themselves -

according to Philo each man wrote his  name upon

the brick before it was laid.

"a tower" - this had its origin in

a deliberate, determined, enthusiastic hostility to

the Divine purpose of God - that they should spread

throughout the earth  - this is the essence of all impiety -

antagonism to the mind of God.

Holiness is but another name for obedience!

The sin of the Babelites was the desire to have

supremacy over nature - a godless spirit of science

and philosophy which recognizes no power or

authority superior to itself.  I ask, is this going on

today at Harvard, Yale, the

"lest we be scattered abroad" - as if the were

determined to distinguish themselves before

surrendering to the Divine command to spread

themselves upon the earth - they aimed at resisting

They are one in race, tongue and purpose.

the Divine verdict will often strangely conflict with the

judgments of men - in that Day lawyers, the Supreme Court,

the ACLU nor the will have any say - only our

Great Advocate - Jesus Christ the Righteous will speak with

"nothing will be restrained from them, which they

have imagined to do"

These people were caught in the very act of

insubordination and so will you if you insist on

taking the ungodly stance you have been taking for

Wilfully worshipping the creation instead of the Creator - all forms of

paganism have come from the Babylonian religion - often in forms of

the Zodiac emphasizing  the heavens, men, and birds and four footed

and abominations of the earth" - even creeping into Christianity!

confusion of tongues and frustrating their

The faculty of speech is a truly amazing attribute of

mankind - it is a great sin to prostitute it in cursing

one's Maker but especially to use it to cooperate in

This process of migration and cultural diffusion

have been confirming that civilization appeared

pretty simultaneously in all parts of the world only

a few millennia ago!

Also, this is the origin of the seemingly difference

in the races of mankind due to close inbreeding!

the epitome of foolishness - the world today

is full of such monuments of folly - emblems

of shame which is the lot of all the wicked

vs. 10-26 - the development of the line of the promised seed

through ten generations to Abram.

(1) every death that happened or happens should sound like

a trumpet call to sinful men to turn to God before it is too late!

(2) Twenty generations had come and gone, and the promise

was not forgotten nor had the holy line become extinct!

wanting in the chain of saintly men through whom the

promise was to be fulfilled!

no children in or - notice how thorough

God is - THE CHILD OF THE PROMISE MUST BE

BORN IN THE LAND OF THE PROMISE! 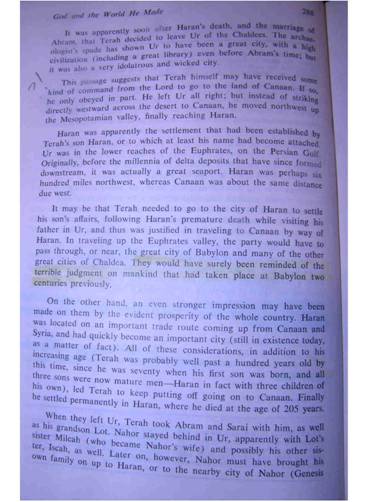 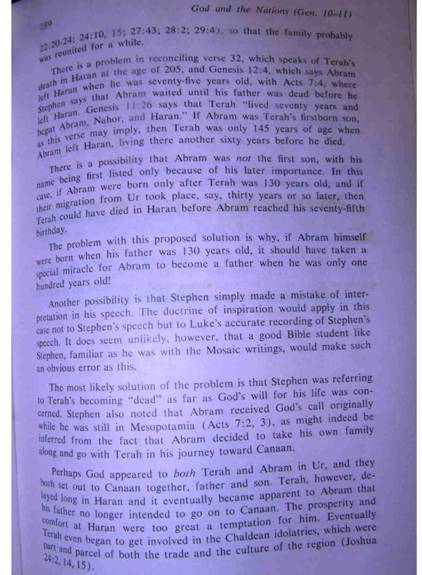 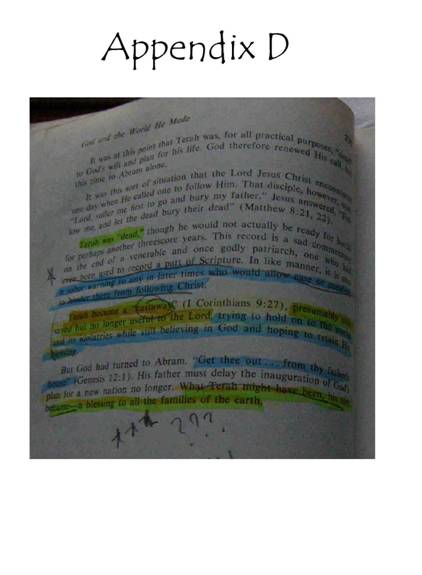