The writer has just quoted from Habakkuk

"the just shall live by faith" and now he

proceeds to vindicate its truth in a series

Faith is the eye of the soul - it is the conviction

"of things not seen" - the organ by which we

look upon the invisible and eternal - if faith is

the eye then the Bible is the eye-glass through

which faith looks - the objects of spiritual

faith are all supernaturally revealed truths -

In the world of sense, of which this society

in which we live is obsessed, "SEEING IS

BELIEVING" - but in the domain of faith,

this maxim is reversed, for in spiritual things,

Faith is the foundation on which hope is built.

Faith is the belief in things, whether past,

present or future, that are not known by

experience and cannot be logically demonstrated.

Faith is the very root and inspiring principle

of all true religion!

It would be irrational to disregard it or to

think it opposed to reason.

Faith is "the substance of things hoped for" -

over indwelling evil (Lord, deliver me from

Satan and deliver me from myself), growing

likeness of Christ, communion of saints,

the blessed prospect of immortality -

The man who hopes in these things will no

longer be dominated by the things which are

"seen and temporal" - he will become

heavenly minded and "the just shall live by

and in a personal Savior - it is God-given

and only the Holy Spirit gives it!

They trusted in a Savior who was yet only

"hoped for" and in a sacrifice for sin that

v. 3 - The visible universe speaks to the soul

of a Divinity beyond them!  of a power

above us to whom we are responsible.

God has two volumes - His Word and His universe.

universe.  Even without a revelation

to declare faith's office is to apprehend

it from observation of the phenomena

Where the invisible things of God from the

Creation of the world are said to be "clearly

seen" being understood by the things that are

made, even His ETERNAL POWER and

Accounting for the seen universe so that

they are "without excuse"!

Unaided reason (philosophy) has never ascended by the

steps of the design-argument up to "nature's

And the candid, sober confession of science still is

there remains the "mystery of the universe" -

the phenomena of matter and of force.

The revelation of God explains this mystery - time and

space were skillfully framed and finished by a simple

direction of the Almighty!  That it was created not

out of some pre-existing materials but was created

by God out of nothing!

Accept it and there follows the possibility of miracles,

and that a supernatural revelation is not an

unlikely blessing - if God has made us in His

own image - then surely we are heirs of

Faith is the belief in the Divine Testimony

whatever that testimony be - the bare Word

of God - in the following verses are some

illustrations of men and women of great

character due to the moral power of their faith.

A national picture gallery, if you will, the

soldiers of faith and their battles.

as representing the righteous seed

in the midst of growing evil - Abel,

by which he obtained witness that he

was righteous, GOD TESTIFYING of

Enoch - a witness for God in a sensuous and

ungodly world - "was translated....God had

translated him:  for before his translation he had

this testimony that he pleased God"

Noah  - "warned of God of things NOT SEEN AS

YET (the divinely predicted events of the

Deluge), moved with fear, prepared an ark to

the saving of his house; by the which he

condemned the world and became heir of

the righteousness which is by faith"

The idea running through the whole Old Testament

is that, in the midst of a sinful world, an inheritance

of salvation was transmitted through a chosen seed,

until the Christ should come as the "Heir of all things"

the perfected Head and Representative of all redeemed

Noah is the first called righteous Gen. 7:1 - the idea being

Abel - a witness against the spirit which denies the

necessity of an expiatory atonement

Enoch - a witness against the spirit of secularism

Noah - a witness against the spirit which stumbles at

ALL OF THE ABOVE MEN AND THOSE WHO

INDIVIDUAL BASIS - unfortunately, it is beyond

thank God that I in my life have had the leisure,

time and opportunity to study each of these,

hopefully to profit for "all scripture is given by

inspiration of God, and is profitable for doctrine,

for reproof, for correction, for instruction in

righteousness:  that the man of God may be perfect,

Abraham - "obeyed; and he went out not knowing where

he went" (to an unrevealed "land that I will show

thee" - he followed God blindly knowing only that

it was right to follow Him - the same for us where

the future may be unknown or dim.

He dwelt with his son and grandson "heirs with him of

the SAME PROMISE....he looked for a city which hath

foundations, whose builder and maker is God"

Sarah - "received strength to conceive seed, and was

delivered of a child when she was past age,

because she judged Him faithful who had promised"

birth of a legitimate heir through whom the promise of an

crowning instance of Abraham's faith - the

long awaited son, in whose single life was bound

up all hope of the fulfillment of the promise

was to be sacrificed - Abraham did not

hesitate - believed God would fulfill the

promise somehow even if it meant raising

The Giver of all deserves our best and dearest -

it was made clear to Abraham that God does

to His will - but He does not require violence to

be done to tender human feeling, or any cruel

rites such as "the fruit of one's body for the sin

of the soul" - such a perverted, disgusting and

exceeding sinful practice such as abortion!

the very fact that they were content to die

without themselves attaining, if so God's

seed, invests them with a peculiar grandeur

intention is overruled in that the younger

is invisible" - his faith of the unseen Heavenly

King was kept alive during the forty years

salvation of the Lord which He will show

"the Egyptians assaying to do were drowned"

Canaanite race is adopted into the

commonwealth of Israel, even becoming

an ancestress of the Messiah!

Faith is exhibited as the principle of religion

to all races - "Whosoever will may come"

"them that believed not" - same words of

those Israelites that fell in the wilderness -ch. 3:18

It is also used of the contemporaries of Noah

vs. 32-38 - exploits of faith throughout history

The author began in Genesis and as he has been

thumbing through the Old Testament page by

he is starting to hurry through this exhibit for

he wants to get to the masterpiece of the whole -

the portrait of JESUS, THE AUTHOR AND 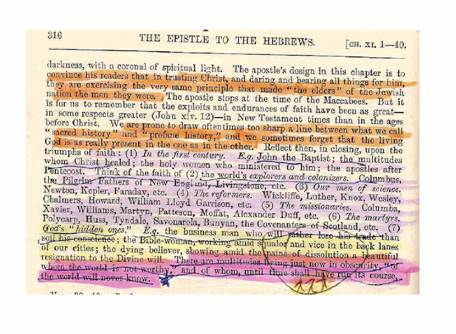 v. 35 - "tortured, not accepting deliverance; that

a resurrection into eternal life which was

better than a temporary restoration to

"of whom the world was not worthy" - their

persecutors condemned them as unworthy of living

in the world; but, instead, God says the world

was not worthy of them.

Salt being effective - beware of the losing of

till the Second Advent of Christ - waiting

for the redeemed of all ages since the world

began, to be gathered into one through

Christ and God shall be all in all!

Christ has come!  He has achieved our redemption!

He has opened heaven over the world; and we see

the angels of God ascending and descending upon

the Son of Man!

How shameful then if we do not believe or allow

our faith to decline, turning into apostasy?  How

miserable then are we if we allow our faith and hope