vs. 1 - pictured as an athletic contest with the participant

In reality no Super Bowl, no Final Four, no World Series

can compare with this because each of us are contending

for the crown of immortality.

That is unless you are an unbeliever or profane person

who hoping against hope, hope that when you die that

is all there is.

an arduous struggle - "the righteous scarcely are saved" -

It is not a stroll, a saunter, nor a jog - it requires strenuous

It is a public spectacle - we are "compassed with so great

a cloud of witnesses"

The idea of an aerial company watching us from above

with sympathy awaiting the day when "they without

The presence of spectators - those who  have run the

Apparently, the spirits of just men made perfect" are

attending the Final Four and once having played on a national championship team) an immense satisfaction from the accomplishment.

On one side  you have the gallery of saints before the

Flood, the heroes of the Exodus, judges and prophets -

on the other a gallery of the apostles of the Christian

our own departed friends.

They are a "great cloud" - numerous in multitude -

and are radiant with the brightness of immortality!

I think of Cecil Thompson and Howard Neely, a deaf

man - both basketball fans & church attendants - the best of

"let us lay aside every weight.....sin which does so easily

vs.  2-3 - The Masterpiece of the whole Gallery/Hall

THE PORTRAIT OF JESUS - THE AUTHOR AND

"Looking unto Jesus, the Author and Finisher of

Here is the portrait of the grandest in the gallery -

"Jesus, the Author and Finisher of our faith" -

my experience looking at the crowd - usually didn't

play well because I was distracted.

He is the Leader of the whole army of faith, whose

standard we follow, whose victory in life, in death

on the cross and His resurrection from the grave,

is the earnest of our own victory!

A WINNING TRADITION IF YOU PLEASE!

HE IS OUR MODEL!

"All things were made by Him; and without Him was

not anything made that was made.  In Him was life"

"all things were created by Him and for Him:  and He

opening the book - this is the seventh seal -

this was in reference to the lesson on Melchizadek

in ch. 7 and the changing of the order of priest-

thigh a name written, KING OF KINGS AND

Therefore:   "Kiss the Son, lest He be angry, and ye

perish from the way, when His wrath is

kindled but a little.  Blessed are all they that

it and attained it and He wants for you and

I the joy of sharing in this triumph.

The joy of attaining the end of my being, your being,

the perfection that God meant for you, for me, and

for which it is my duty, your duty to aspire!

v. 4 - Here we have a transition from a race to combat.

Our trials have not yet reached the point of dying

many down through history.

Learn to view afflictions as corrections of the Father's

heavenly love - they attract our soul towards God Himself,

as our only source of Rest, Strength and Joy - the unchastised

man is "illegitimate" - in the old days he was called a bastard!

Christ was made "perfect through sufferings" - ch. 2:10

Do not become insubordinate and cross through cross

WILL MAKE YOU BETTER OR BITTER - (Joe B. Hall's

basketball calendar once upon a time)

We are to cooperate with God in carrying out their purpose -

they are the gymnastics of the spiritual life - (easier said than

done) - "my grace is sufficient for thee for my strength is

God loves not to smite but smites because He loves!

We benefited as children when corrected by our natural

parent - how much more for our spiritual and immortal

being educated for spending eternity with God!

v. 9 - "shall we not much rather be in subjection to

the Father of spirits and live?"

God is the original author of flesh as well as spirit!

us and in our best interests -  remember "we know

that all things work together for good to them that

love God, to them who are the called according to

We may also conclude that He will discipline till

the end be attained and if we are not disciplined - ponder

v. 11 - "afterward it yieldeth the peaceable fruit of

of righteousness unto them which are exercised

v. 12 - encourage one another as Bro. Wilson preached

v. 13 - A straight course - "the closest distance between

two points is a straight line" - so make a bee line

to God, fall on your knees and confess your sin,

"He is just to forgive and to cleanse us from all

"Hands....knees...feet" - represent the powers of action,

The whole church should advance with such unanimity

that the highway of holiness will be beaten bare and

no one will stumble therein, even the "lame".

Just don't run in the opposite direction - people need

vs. 14-15 - a strong warning against dissensions and

"follow peace with all men" - hard to do - we need not

expect God to bless when grudges are held against one

another - it stunts spiritual growth - it is called a

We must be pure as well as peaceable - "follow...

holiness without which no man will see the Lord"

We are to help the weak and guard the lame!

Esau permanently lost privileges which in his

profaneness he had scorned! 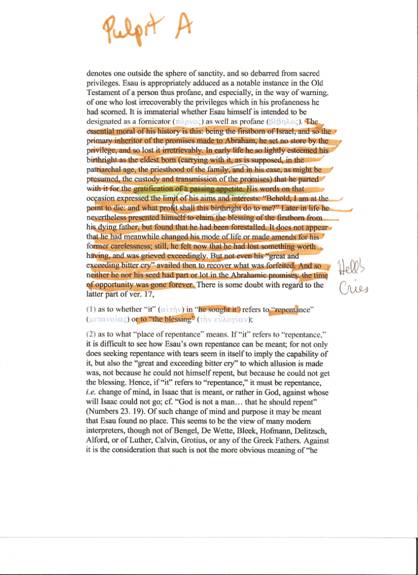 Were his tears only vexation and remorse? -

Esau is a warning - beware the effect that

they may be lost beyond recovery.

We  are not to be a sensualist - common, secular

nor worldly, loving only the things of sense and

time with no appreciation of things spiritual or

Esau was such a man - he cared nothing for things

of the covenant - he bartered away his birthright

for pea soup and in this was "God-rejected" -

BEWARE THAT YOU MAKE AS BAD A

BARGAIN AS ESAU DID!

He waded into that whirlpool of apostasy and

"wide is the gate and broad is the way that

leadeth unto destruction, and many there be

in His wrath against sin

"they that heard entreated that the word

It was a ministration of death and condemnation -

it pronounced curses  upon the disobedient - it

was provisional and preparatory to bring them

to Christ, to , the Heavenly a

vs. 22-24 - Christianity speaks of righteousness,

not ritual - the gospel laws are written on

No night, cloud nor storm gather around Mount

Righteousness shines on its towers and palaces and

mansions, gilding them with brightness & beauty!

* the city of the Living God

* an innumerable company of angels

* the general assembly of the church of

the first born (enrolled in the album of Heaven)

* the spirits of just men made perfect" - (we one

*JESUS, the Mediator of the new covenant

* Jesus speaks of reconciliation and peace

If you find yourself perplexed and disheartened

by what is going on in the world - think of the

countless multitudes who are on your side -

but especially, Remember Jesus who has said

"I will never leave thee, nor forsake thee.  So

that we may boldly say, The Lord is my helper,

and I will not fear what man shall do unto me"

No longer living a tent-life but living in a

"kingdom which cannot be shaken"

Our responsibility is to obey the voice of God -

think of the damage being done in the world

presently, with eternal repercussions, as men

listen to the thinker, Carl Sagan, the pseudo-

the leader of , the social reformer, Bill

Clinton, and his obsession with AIDS, the

The Christian's life is to be one of devout

consecration with a befitting spirit of

"reverence and awe" - his manner and tone

is not to be flippant or frivolous but grave,

Too often in churches the spirit of the above

often delegated to the worldly successful -

How shall we escape if we turn away from

the full revelation made by the Son of God,

The final dissolution of the whole present

order of things to be succeeded by the kingdom

v. 28 - " Wherefore receiving a kingdom that

cannot be shaken" the finished work of God -

the Divine masterpiece - everything connected

with it is stable - it is beyond the veil of this

visible scene and will survive the world's

"let us have grace"

What a joy to live, as we do, among these abiding

realities - Christ's kingdom will stand for ever -

still a consuming fire against evil, as He

declared Himself from Sinai.

God has done all for us that He can do - God's

character is not one of those things that can be

shaken - if the God who spoke at Sinai was just

and severe - the God who dwells at is no

If we scorn the present dispensation of grace -

"Today, if ye hear His voice, harden not your

hearts, etc", the Day of Judgment will still be