the right hand of the Majesty in the

"which the Lord pitched and not man"

holies once a year on the Day of

Atonement, merely stood for a short

time but Christ "has sat down" at

the right hand of the Eternal and

in an attitude of royal government

makes intercession for us and awaits

the Father sending Him to gather us

"example and shadow of

"See, saith He, that thou make all things

according to the pattern shewed thee in

..a better covenant...established on better

v. 7 - the First Covenant was not faultless..

itself but the people for non-observance.

It was imperfect as a means of justification

before God once it was broken!

A temporary dispensation, with a purpose

of its own, (a type of spiritual mirror so

that man could see himself and how far

short he came to God) - intervening between

the promise to Abraham and the fulfillment

of that promise in Christ.

The Law was "our tutor to bring us

The chosen people had not continued in God's

covenant and because they had broken it,

He had "regarded them not" - allowing first

and then to be carried into exile.

But in His wonderful mercy, God made a

and all Gentiles who would trust Him.

Under the New Covenant God's laws are not

imposed as external codes but put into the mind

and written on the heart!

The first laws were put on tables of stone by

"the finger of God" and now that the Church

has come to manhood, the laws are now

inscribed "in tables that are hearts of flesh"

They will be more clearly perceived and more

The Holy Spirit teaches "from the least to

"for they all shall know me from the least of

them unto the greatest"

The poorest and simplest believer may have

personal communion with God and a peculiar

glory from God all their own, surpassing even

that of his appointed guides,  priests or teachers

who may sometimes become unfaithful - thus

giving the enemies of God reason to blaspheme.

all my teachers; for thy testimonies are all

v. 12 - Full forgiveness of sins - sin must be pardoned

and cleansed away before the Law can be

written on the heart, or the mind flooded with

spiritual light.  None of the Levitical sacrifices

could expiate moral guilt; but on the basis of

forgiveness which is the precedent condition

of moral renewal and a holy life. 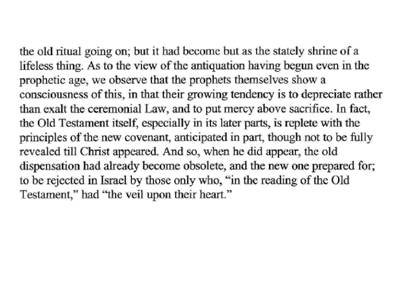 God said in the First Covenant "thou shalt not"

but in the ordering of the New Covenant His words are

This change of language really points to the effusion

(pouring out freely) and the diffusion (scattering)

of the Holy Spirit.

The Holy Spirit was poured out on the Day of Pentecost,

my commentary says it is the anniversary of the giving

of the Law from .

The Holy Spirit is who makes the New Covenant vastly

superior to the Old.

We should ask ourselves  whether our souls

individually are sharing the blessings of the

The "better promises" also imply on our part

The Epistle to the Hebrews is the New Testament

Looking at a stained glass window from the

outside, seems dull and dingy but when you

enter and gaze at it from within, it is aglow

with beauty and sunlight as a backdrop.

From Hebrews we learn to read Leviticus

with the bright gospel sunlight for a

background and we discover how rich

that ancient Scripture is with instruction

wondrous scheme of redemption of

I do not have the time, nor the ability,

nor you the resolve to listen concerning

these things but God through the Holy

Spirit will reward you with a private

study of these things.

The Levitical system delivered to Moses

compared with the work of Jesus Christ,

the Great High Priest of Humanity, the

What the Great Day of Atonement signified!

It was not the sins done with a high hand

that had to be atoned for on that day, these

were either visited by "cutting off" or

atoned for in ways appointed for the purpose,

it was the less definite and undetected sinfulness,

infecting the whole community, and remaining

after all ceremonial cleansing, so as to debar

them from "coming boldly to the throne of

grace to find help in time of need"

God's judgment?  He is "not willing

that any should perish but all come to

came and took them all away - so shall

also the coming of the Son of man be"

The sin was still not taken away, only

"covered" for the time; for the holy of holies

remained closed as before, and the same rites

had to be repeated next year - all that was

expressed was an ever-reoccurring need of

that the way into the holiest of all was not

This debarring intervention meant that

there was no  approach for them as yet

to what the holy of holies symbolized.

To understand this you must be familiar

with all the book of Leviticus - especially ch.

The gifts and sacrifices of the Law availed only

ceremonial purification - they did not reach into

the sphere of man's inner consciousness!

They could not bring about that sense of

spiritual accord with God spoken of in Jer. 31.

v. 9 - the rites of Judaism cleansed the body from

ceremonial defilement, but they could not

wash the soul from sin - they involved rather

a continual remembrance of sins rather than

a putting away of sins for ever.

Yet they were a prophecy of such forgiveness

"but by His own blood He entered in ONCE

into the holy place, having obtained eternal

Christ, as man, also was Divine in nature, personally

and literally God - it is His Deity that give His death

The blood of Christ cleanses the "conscience" -

It is the God-provided solvent for the stains of

sin!   (my new jacket Polly got me and the

strawberry stain I got on it Friday night)

Under the New Covenant the conscience is

cleansed so thoroughly that the service of God

becomes a constant joy to the believer's soul!

Christ not only makes us safe but makes us holy!

He delivered us not only from God's wrath

but from our own wickedness!

He redeems both soul and body - the benefits

which accrue from Christ, our High Priest's

the new testament" so that "they which

v. 17 - Such atonement could not be except by

death - the death of Christ bequeathed

the life of sinful man is forfeit to Divine

justice, and so blood, representing life,

must be offered instead of his life for the

v. 24 - Christ first offered Himself in this

earthly sphere and then passed into

the heaven of heavens.

No need of repetition - the redemption is

Justification through atonement and

We can now, through Him, serve the Living God!

needing no repetition - ever since sin entered

man needed atonement, signified but not

effected by the ancient sacrifices.

Christ's one offering of Himself has supplied

this primeval need, availing not only for the present

and future, but also for all past ages!

as a Prophet - ascended He functions as

a Priest and when He comes again it will

the Second Coming - nothing remains for

Him to do but to return as Judge in glory!

This will not be to all good news - "unto them that

look for Him" - precludes that - there are many

passages in the Bible that express the doom of