grandfather, Manasseh.   Proof that anyone can, through

wrong, and have the character molded in righteousness.

is common to man:  but God is faithful, who will not

suffer you to be tempted above that ye are able; but

will with the temptation also make a way to escape,

that ye may be able to bear it"

but "THE BOOK OF THE LAW"

"therefore my wrath shall be kindled against this place,

and SHALL NOT BE QUENCHED"

Yes, the decree is gone forth, it is too late to avert the

sentence!  When a nation persists long in evil-doing,

there comes a time when the sentence cannot be averted.

For such a state of things "there is no remedy" - II

bring evil upon this place, and the inhabitants

thereof, even all the curses that are written in

the book which they have read before the king

law, that he rent his clothes" - he did this in grief

that the practice of his nation, had gone so far

and made a covenant before the Lord"

all ranks of people went with him.

v. 3 - Renewing the covenant which had been broken

by neglect and pursuit of idolatry.

After such a gross national apostasy, it is only fitting

that there should be a sort of public reparation of the

As the law had been  put out of sight, neglected, forgotten,

it is now publicly recited, proclaimed and declared to be

the basis of the national life.  The king read "all the words

of the law" and the priests, prophets and people stood

WHAT AMERICA NEEDS TO DO - IT IS THE ONLY

HOPE AND REMEDY - TO RETURN TO THE GOD OF OUR FATHERS!

a.  Purging of the Temple

b.  Banning of idols or burning by fire as

required by the Law - they did this far

enough away so that even the smoke should

not pollute the town and "carried the ashes

of all the religious impurities which had over-flowed the

land - that which came from Bethel was taken back.

causes calcination of  metals and a small amount

of force will crush them into fine powder - it was

spread over the graves of the children of the people.

house of the Lord - were removed

e.  those who had participated in the semi-idolatrous

services were disqualified for temple ministry

word comes from a drum - valley of Hinnom  - a

garbage dump - came to be symbol of hell.

practices -  burned men's bones on them

perform the words of the Law"

nature of man, all the energies of his understanding, his

revocation of the sentence passed on Judah in

consequence of the sins of Manasseh.

THE FATE OF JUDAH WAS FIXED!

The  hope only is like the imagery used in Amos 3:12

Hope in God today - Accept His Son Jesus Christ as

the Atonement for your sins.

AMERICA - YOU HAD BETTER BE CONCERNED

ABOUT GOING TOO FAR!

The sins of Judah now as great or greater than those

God hath concluded all in unbelief that He might have

Jehoiakim - v. 37 - the Bible says he leaned towards

invasion of Egypt and later that of Nebuchadnezzar.

v. 3 - no other cause but the commandment from God

The class of sins introduced by Manasseh was persisted

in by the  people - God judged - generation after

generation continued to be guilty:

v. 13 - Nebuchadnezzar's plunder "as the Lord had said"

Babylon, not Assyria, did in Israel!

Iraq - trying to do in America? 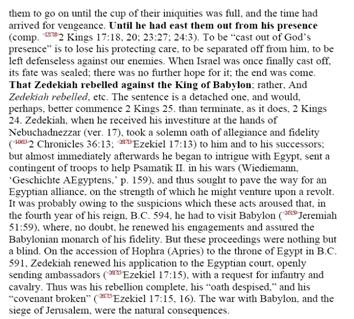 people.   Deprived of half her population, Jerusalem

could scarcely recognize herself  - "she sat solitary"

Fall of Jerusalem - a warning to all nations

v. 1 - extreme exactness with respect to a date

indicates extreme importance of the event

In  both I & II Kings there is no evidence of

the month, day and year being give except here!

Temple was built according to Josephus

Increased wickedness  had brought about

that she had greatly offended God.

God had always given help, His arm was never

shortened until their idolatries, their immoralities,

their cruelties and wickedness had shortened His

arm that he could not nor would not save.

Ought not each of us feel the fate a warning to itself?

A warning to repent from evil ways and walk in the

experienced a happy change of circumstances,

A FORESHADOW OF REAL ISRAEL????

One short chapter now brings to a conclusion the

Thirteen verses sum up the reigns of the last four

pre-captivity kings of Judah, who by their godless

lives hastened the ruin of the kingdom.

The term of life is run, therefore, within a very short

length, and with great sadness, the coming end falls

upon us before the horrors of the end itself overwhelm us.

v. 3 - of Jehoahaz it is said that the king of Egypt

"put him down" - terms the pop culture or rap

My question is "do they comprehend" what they are