This is a lesson of benefit to all, but in my humble

opinion, is a smoke screen to detract from the real

issue, which is abortion on demand, and should not

take priority over the traditional lesson, which

usually emphasizes the "sanctity of life" - the life

tradition and 33 years of Roe vs. Wade apparently

now qualifies as tradition.  Did you listen to the

whining of grown men of the Judiciary Committee

this week in the confirmation hearings of Judge

I can attest to the need for such a lesson - experience

at the beginning of integration, that the black as well

as the white community had taught their children -

this was in the days before "free sex" and the drug

of my tenure, a principal in a meeting at the beginning of

the school year implored the faculty to respect the students

now that I am an elder, where is my respect?"

when he is old, he will not depart from it"

The attack on traditional Judeao-Christian values

in the courts and the "anything goes" life styles  of the

The world has now come to no morals and no manners.

Nothing of equal or superior value has replaced

whether it be governmental or private.

What has taken up abode in our culture are

tradition, even in churches are thrown out the

When I went to prepare for this lesson, I was

disappointed that it did not face up to the real

issue - the tragedy of Abortion - I immediately

looked to see who the author was and not

surprisingly, it is someone from Saddleback

Church, the one of Rick Warren fame - remember

the wisdom of ditching Jeremiah in favor of turning

over a church to someone we did not know, for six

weeks.  It was supposed to be a cure all for the

problems of this church but I have heard little

of it once it was completed.

I say this because I held my nose then, and tried

to do the best I could  with Forty Days of Purpose,

in the name of unity and I say the same today,

I hold my nose and teach on respecting the elderly

as a "sanctity of life" issue on par with abortion

on demand -  apparently success in the literary

even those on the periphery that are associated

with the movement and now are leaders in the

I have one more disclaimer  - how strange that

abortion on demand nips potential old people in the

bud and thus eliminates the problem.

The Bible teaches us to respect those who are older.

are to honor those who are older.

Barzillai is described as an 80 yr. old man - Jewish

tradition called for young people to stand when an

old person was within seven feet and could sit back

down when the person had  passed.

Barzillia was  a rich man of status and was

gracious in helping David and his followers

during a time of great need.

Perhaps someone  older has helped you in life,

through financial assistance, hospitality, under-

standing or wise advice - passing it on is God's

David was grateful and offered to take care

of Barzillia until his death - notice the reply

This reminds me of what is coming to all -

him in stead  - "put new wine in new bottles"

Generational conflict between the young and

old can have churchwide complications -

for around 10-12 hours dealing with conflicts

over contemporary vs. traditional ways of doing

The youth were not involved, I remember seeing

one on Friday night in attendance and one to

my knowledge on Saturday

Yet in this conflict  - go back to the survey to

change, only 20% of the church responded and

of that 20% there was a disproportionate response

from youth to adults.

and trying to avoid this both on a national

Jude  11 "perished in the gainsayings of Core"

My own standpoint - the ideal is the testimony of

John the Baptist - "He must increase but I must

The strange fire of Nadab & Abihu

deal harshly with contrasted with "exhort"

which has to do with beseeching, understanding,

some of these problems brought on by pastor

who sought only young men's advice - the 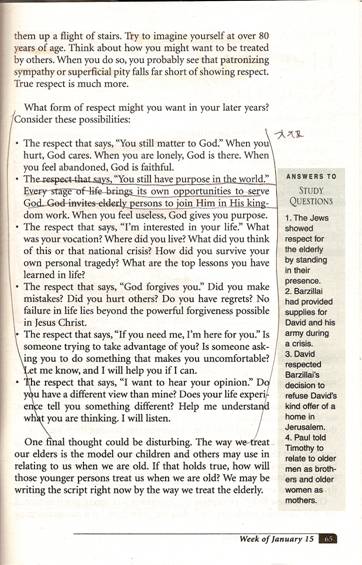